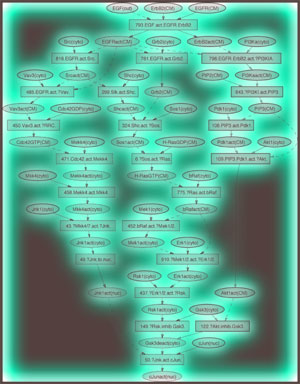 Pathway Logic is an approach to modeling biological entities and processes based on a simple but powerful logic called rewriting logic. Pathway Logic is an example of how formal modeling techniques can be used to develop a new science of symbolic systems biology. This computational science will provide researchers with powerful tools to facilitate the understanding of complex biological systems and accelerate the design of experiments to test hypotheses about their functions in vivo.

Pathway Logic uses rewrite theories to formalize the informal models that biologists commonly use to explain biological processes. Such formal theories can include both specific facts and general principles relating and categorizing data elements and processes. New data structures for representing biological entities, their relations and properties can easily be defined. Representing biological knowledge using formal rules and concepts allows data to be interpreted, combined, and queried in the context of biological knowledge. Theories concerning different types of information can be combined using well understood operations for combining logical theories. A wide range of analytical tools developed for analysis of computer system specifications can be adapted to carry out new kinds of analysis of experimental data curated into formal theories.

Pathway Logic is currently being used for the modeling and analysis of signal transduction and metabolic networks in mammalian cells. Pathways leading from different initial conditions can be generated automatically from collections of network elements -- thus, in silico experiments can be performed to study the effects of perturbations of these networks. Pathway Logic models are represented using the Maude system a system founded on rewriting logic. Models can be queried and in silico experiments carried out using the execution, search and model-checking tools of the Maude system. Some current capabilities of Pathway Logic include the following: