STM8 is a formal knowledge base containing information about the changes that occur in the proteins inside a cell in response to exposure to receptor ligands, chemicals, or various stresses. STM8 is represented in Pathway Logic (PL) and can be explored using the Pathway Logic Assistant (PLA). The key features of STM8 (and PLA) that distinguish it in various ways from other signal transduction pathway knowledge bases and viewers (such as Reactome, KEGG, Cytoscape, CellDesigner) are:

Cell biologists spend a lot of time throwing things (stimuli) at cells in culture and studying the results. The STM8 Response Networks are formal representations of conclusions that can be made from such experiments. These representations constitute executable models that have natural graphical visualizations. The STM8 collection also includes a phenotype (story) network (the Death network). Phenotype networks focus on a particular endpoint or goal and may have multiple stimuli, in contrast to the response networks that have a single stimulus and may have many different endpoints. In either case, the size (number of rules and datums) of each network depends on the available literature and the interests of our clients.

Projects often require for networks that have a particular outcome (such as apoptosis) but not a specific stimuli. Story (phenotype) networks are built by collecting statements made in review articles, translating them into rules, and using PLA to display them. An example of a story is the Death Network assembled for the Iarpa FunGCat project:

The review articles used for Death Network are:

In many cases, the supporting reference (the numbers represent PMIDs) will be marked "done" but there will not be any datums in the evidence page. That is because we could not find any connection between the statement and the experimental results. You can check for yourself by going to http://datum.csl.sri.com and entering the PMID into the search box. This will bring up all the datums curated from the reference.

Why tell a story? Consider Pyropotosis from the evidence. Most of the experiments from the review articles are done in mouse bone marrow derived macrophages and are about mouse proteins involved in inflammasome formation. The end goal of pyroptosis is the secretion of mature IL1b. Why are there so few experiments using human cells and proteins? One of the excuses is that obtaining bone marrow macrophages from human is not practical. But immunology text books tell us that IL1b is also secreted by epithelial cells (Janeway), fibroblasts, and hepatocytes (Abbas). Now that we have our story, we know where the gaps in the evidence are (see the yellow rules) and we have descriptions of the experiments that were done to put the story together. Given the existing preliminary data, it would be simple to design experiments using a human cell line and see how the story plays out in humans.


Demo: How to use PLA to examine the Death Network

This demo assumes that the user is already familiar with the use of PLA as described in the SmallKB guide and the PLA reference manual . In the following guided tour, double click on a figure to see an enlarged version. Single click to restore the figure to its original size.

Download the PLA STM8 Launcher from PLA Online. Follow instructions on the page to get around security barriers and start the launcher. A launcher window will open showing the collection of STM8 networks. Clicking on a network name will display information about the network.

Screen shot of the STM8 launcher with the Death network selected

Select the Death network and click on the launch button.

When PLA starts up, a knowledge base manager (KBManager) window (title: Death Manager) appears in the upper left corner of your screen. The KBManager displays a list of available knowledge bases (rule sets). "RKB" is selected by default and will be highlighted in blue.

Shortly a PLA viewer window with tab titled graph2:DeathDish will appear on your screen displaying the Death Network. [Note that the graph numbers in titles may differ if you have created graphs or nets in addition to those discussed in the demo or restarted with a fresh PLA. This is fine.] 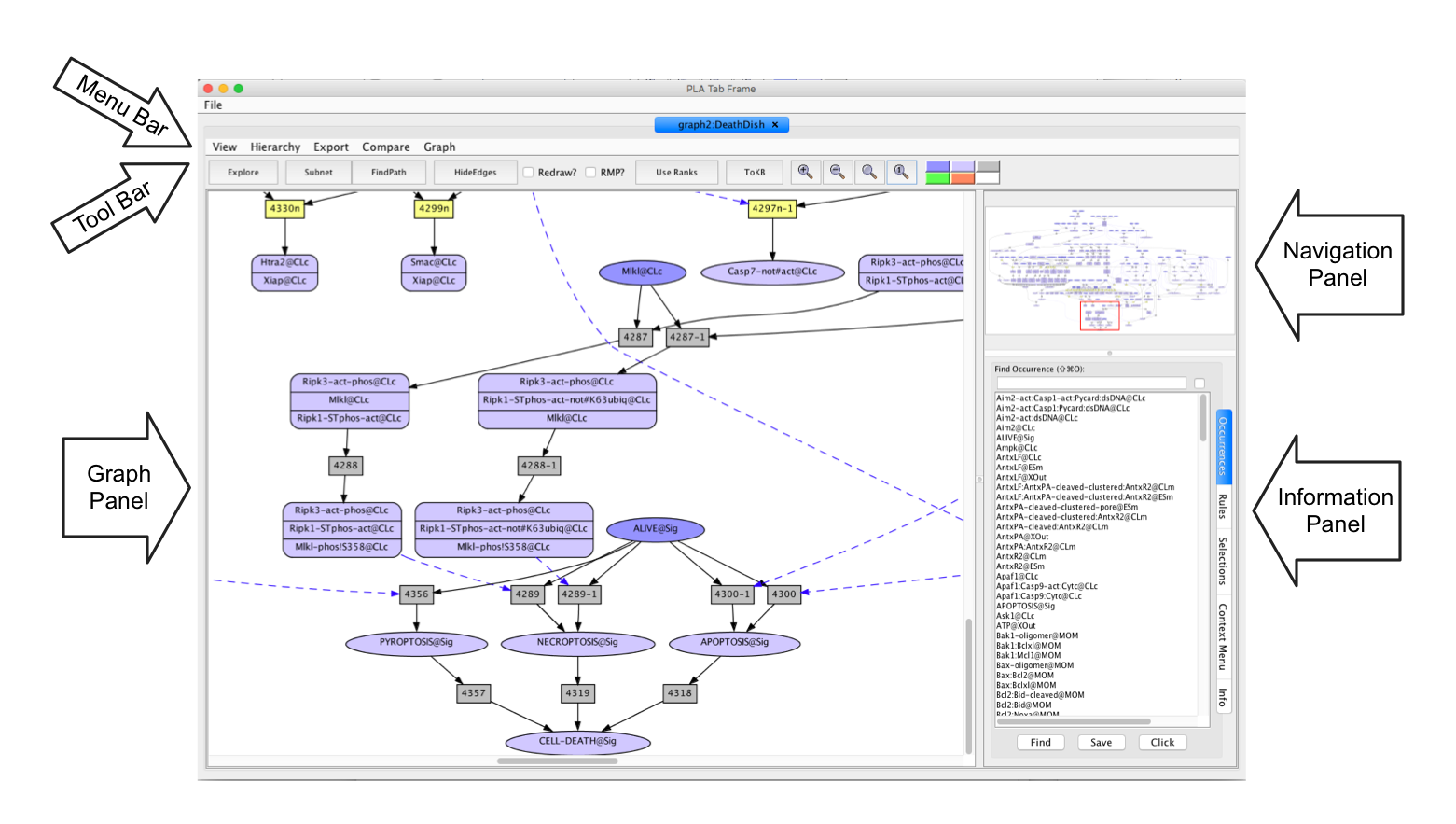 
About the Petri Net Representation

A network of reactions is displayed as a graph with two kinds of nodes. Ovals represent occurrences—proteins or chemicals in a specific state and location. For example the oval labeled Casp7-act@CLc represents the protein Casp7 in its active state located on the cytoplasm (CLc). We use the following notation:

Here are some ways to explore the Death network.

There are three ways that cells can die in this network: Pyroptosis, Necroptosis, and Apoptosis. Lets look at Apoptosis.

Shortly a new tab will appear displaying a graph representing a subnet containing all the paths leading to Apoptosis. Simplify the graph by hiding redundant edges. 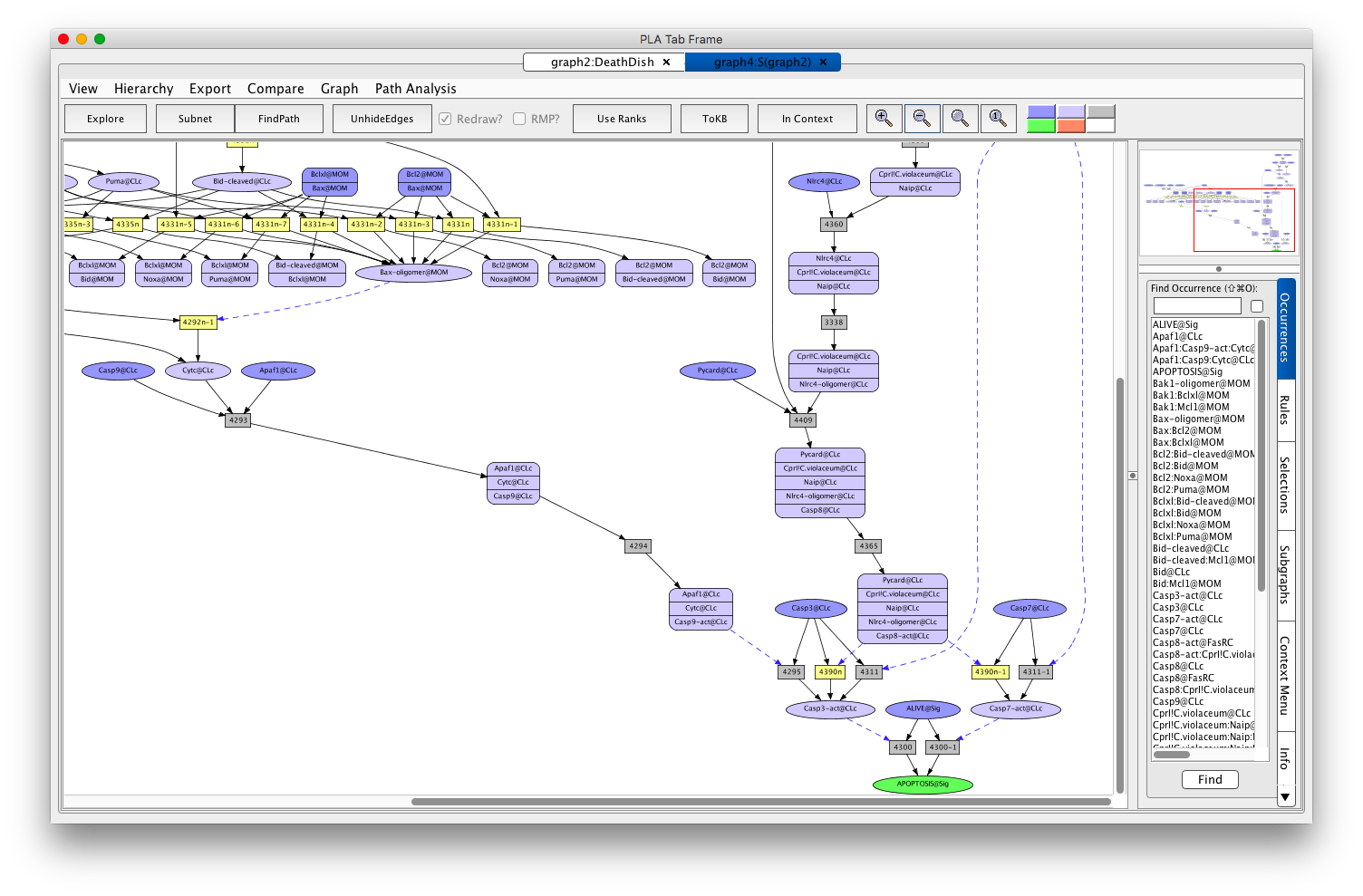 Now ask how many paths are in the network that can lead to apoptosis.

The answer will appear in the information panel. (There are 20 paths.)

To look at each of the paths in context of the graph:

All the paths will be listed in the info panel (since they all must turn ALIVE into DEAD). These are shown as lists of rule numbers but each can be highlighted in the graph by clicking on the box in the highlight column.

Suppose you are only looking for paths originating from the needle protein from Chromobacterium violaceum (CprI!C.violaceum).

There are two paths using CprI!C.violaceum@CLc. You can compare the two paths by clicking back and forth or you can compare them directly. For each path launch a new network by pressing the Launch button at the bottom of the panel. You will now have a graph for each path (graph6 and graph8). From graph6 (the first path launched) click on Compare in the menu bar. Choose graph8 (the second path launched) from the list of graphs. A compare graph will appear. 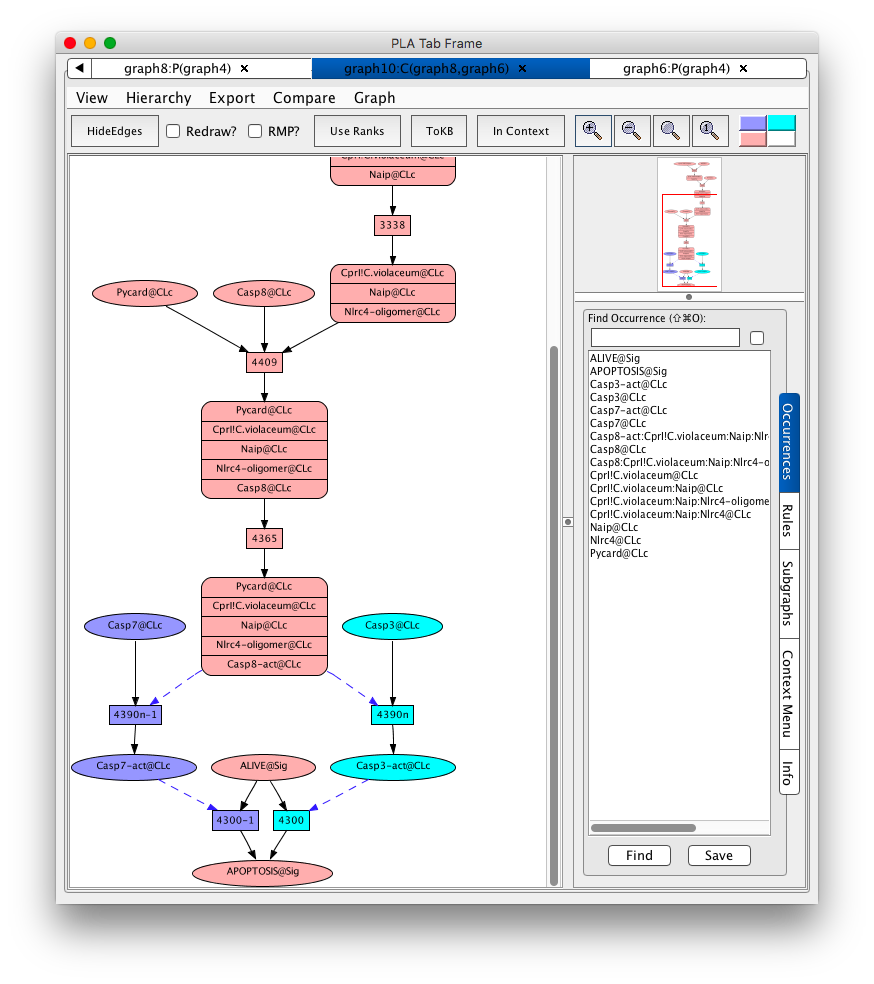 Comparison of paths from CprI!C.violaceum@CLc to Apoptosis

We have supplied a table of modifications and locations above but what about the proteins and chemicals. If you are unfamiliar with the name we use for a protein or just want to learn more about it, you can click on the occurrence node. The Context Menu Tab in the information panel (lower right) will display some buttons which include "About Occurrence". Clicking on this button will display relevant information. For proteins, there is a link to the UniProt record. For chemicals, there is a link to the PubChem CID.

A page containing all the datums used to create the rule will display.

Not sure how to read a datum? You can find details in the Datum KB documentation .

A page containing the assertions that were used to make the rule will display.

That should get you started. Please look at some of the response networks. (Go back to the STM8 launcher, select a response network and press the launch button.) In the case of the very large nets, when you select the dish the PLA window displays the list of occurrences rather than the graph. This is because the graph is complex, looking rather like a dish of spaghetti and may just confuse (or frighten). If you really want to see the graph, press the Render button. It may take a couple minutes, so have patience. If you know the goal you are interested in, you can skip rendering the full graph and use the selections tab to set the goal and compute the relevant subnet. If you are interested in the rules that change or use a particular occurrence, you can use the PLA Explore mechanism to display the surrounding network, restrict exploration to upstream or downstream events.

The curation of STM8 was partially supported by funding from NIH, NSF, DARPA, and IARPA.