In Pathway Logic (PL) steps of a signal transduction pathway/process are represented as transition rules that change the state and or location of signaling proteins. A protein (or other biomolecule) together with its state and location is called an occurrence (also called a species in some modeling systems). Rather than model predefined pathways, transition rules, representing biochemical reactions/transformations, are curated from the literature and collected into a knowledge base (KB). In the context of such a KB, a model is specified by specifying the set of occurrences initially present (called an initial state or dish, as in petri dish). See PL basics for more details about the PL representation system.

The PLA viewer allows you to browse and query networks derived from an initial knowledge base. SmallKB is a small part of a model of the response to Egf stimulation in epithelial-like cells. It includes sufficiently many reactions to illustrate many features of signaling networks while being small enough to allow the user to quickly try the different features of PLA. See the PLA reference guide for a more complete description of PLA features.

When PLA starts up, a knowledge base manager window (title: PLA KBManager) appears in the upper left corner of your screen. The KBManager displays a list of available knowledge bases (rule sets). Initially, in this demo, there is just one KB, SmallKB. The currently selected KB highlighted in blue.

Screen shot of the PLA KBManager

Start by selecting a predefined dish: press the "Select Dish" button on the right side of the KBManager window. This produces a menu with two options: "Edit" and "PreDefined". Select (click on) "PreDefined". This produces a (sub)menu with a list of pre-defined dishes (in this case "rafUbe213Dish" and "rasDish"). Select "rasDish" (by clicking on the corresponding menu item). Shortly a PLA viewer window (titled InitialNet for rasDish (graph2)) will appear on your screen displaying the rasDish model (the network of reactions reachable starting from the occurrences in rasDish). 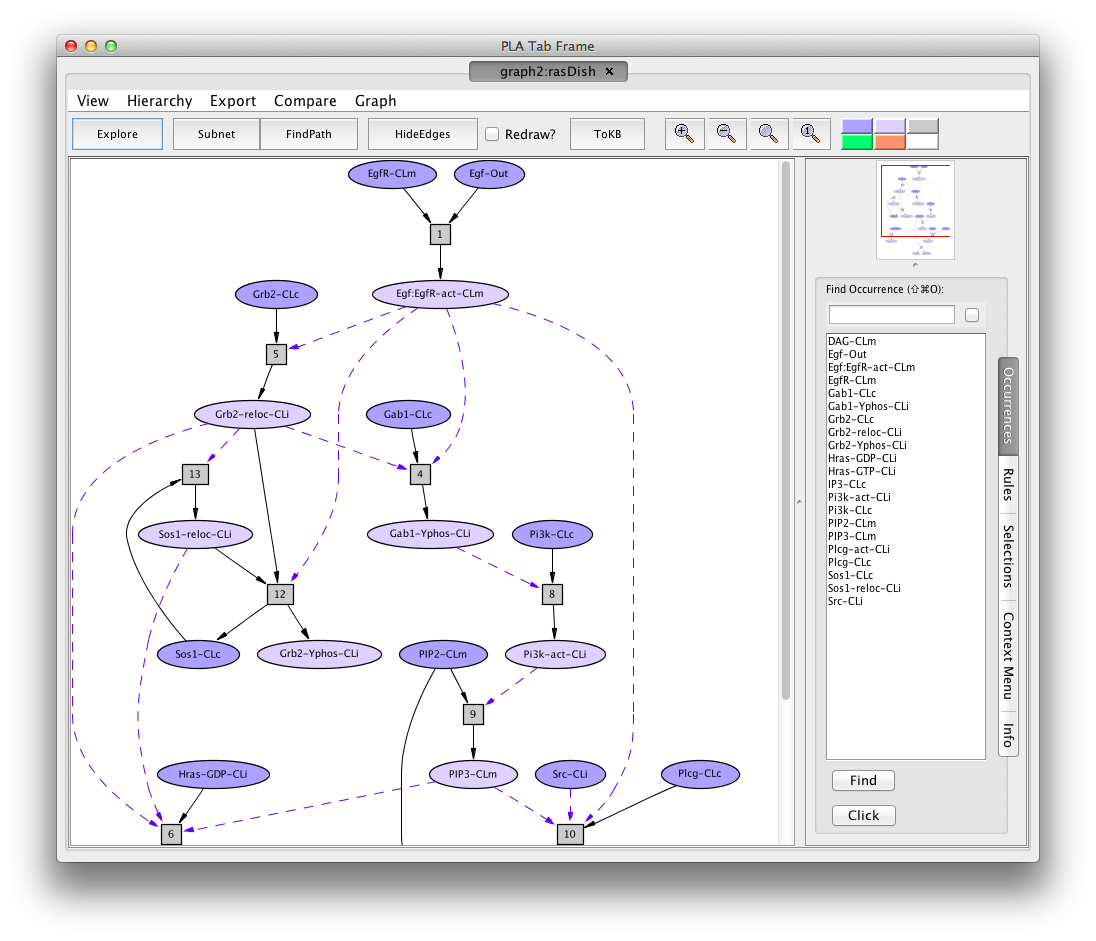 A network of reactions is displayed as a graph with two kinds of node. Ovals represent occurrences---proteins or chemicals in a specific state and location. For example the oval labelled Egf:EgfR-act-CLm represents an Efg receptor (also known as ErBb1) that is bound to its ligand, Egf (Egf:), activated (-act) and located in the cell membrane (-CLm).

We use the following abbreviations.

In the lower right of the PLA graph window is an information pane with several tabs. The "Find" tab (the default) contains two lists: on the left a list of all occurrence nodes in the graph, and on the right a list of all rule nodes. You can use these lists to find a node of interest and center the view on that node.

Getting Information About Graph Nodes.

Clicking on a node displays information options in the Context tab of the information pane.

Enough browsing! Lets find some Pathways. A pathway is a collection of rules assembled in response to a query. A query specifies goals---occurrences that should be present, i.e. states and locations of proteins. It may also specify occurences or rules to be avoided. The execution of a pathway (see #Petri nets) leads from the model's initial state to a state satisfying the goals, while not passing through any states containing occurrences to be avoided, or using any rules to be avoided. For the tour we will find two pathways, one activating "Hras" and one activating "Plcg" and compare them.

Next find a pathway activating Plcg.

Now we can compare the Hras and Plcg pathways. In the new pathway window (title: Pathnet in rasDish (graph 6), subtitle Goals: Plcg-act-CLi) click on the menu labelled Compare. The window hierarchy will be displayed (gray names are not comparable graphs). Choose Pathnet in rasDish (graph 4). A new graph viewer window will appear displaying the comparison graph. Nodes that belong to both graphs are colored pink, those only in the starting graph (the pathway to Plcg-act-CLi) are colored purple, and those only in the compare to graph are colored cyan. (You can get this information from the color key at the right of the tool bar by mousing over the color of interest.) You can see the comparison graph in the context of the common parent (the rasDish net) by clicking on the In Context button.

Making Your own Dish.

Now try making your own dish (with a little help). We are going to do this using the dish editor, starting with the pre-defined rasDish and adding some occurrences, namely Ube213-ubiq-CLi, Cbl-CLc. This will add a new branch to the rasDish network

Using the compare button or menu compare the graph for myDish to the rasDish graph (graph 2). Try navigating, finding paths, and comparing in the myDish model.

PLA assumes that a component (protein or chemical) appears at most once in a dish -- independent of its modifications, binding to other components in a complex, or location. The current version of the PLA dish editor does not enforce this (its on the TODO list). So the user needs use self-restraint and not have more than one occurrence of a component in the dish when the OK button is pressed. For example a dish with both Efg-Out and Egf:EgfR-act-CLm is not allowed.

Another mode of using PLA is to incrementally explore a network starting from an initial set of nodes. Exploration can be initiated from a knowledge base (select one in the KBManager window), or from a network derived from an initial state. The initial nodes for exploration can be specified by choosing a set of occurrences (using the Explore(occs) button) or by choosing a set of rules (using the Explore(rules) button).

Lets explore in the network for the rafUbe213Dish starting from Sos1-CLc.

There are many ways to explore -- you can explore up or down from all occurrences (that have unexplored connections) using the Up/Down buttons in the tool bar; you can select one or more occurrences to explore from (either by clicking on the occurrence as for goal setting followed by exploreSelected, or by using the Explore button in the tool bar), you can hide rules that appear in the graph, you can add new rules or occurrences that may have no current connections (via the Explore button). By default, each explore operation modifies the graph and the modified graph is displayed in the same window (the previous state is lost). If at some point you wish to save the current exploration state, but continue to explore, you can check the "New Frame" box in the tool bar to continue in a fresh window.

Although there are features of PLA that we haven't used, this should give you a idea of what can be done, and the reference document will fill in missing details.